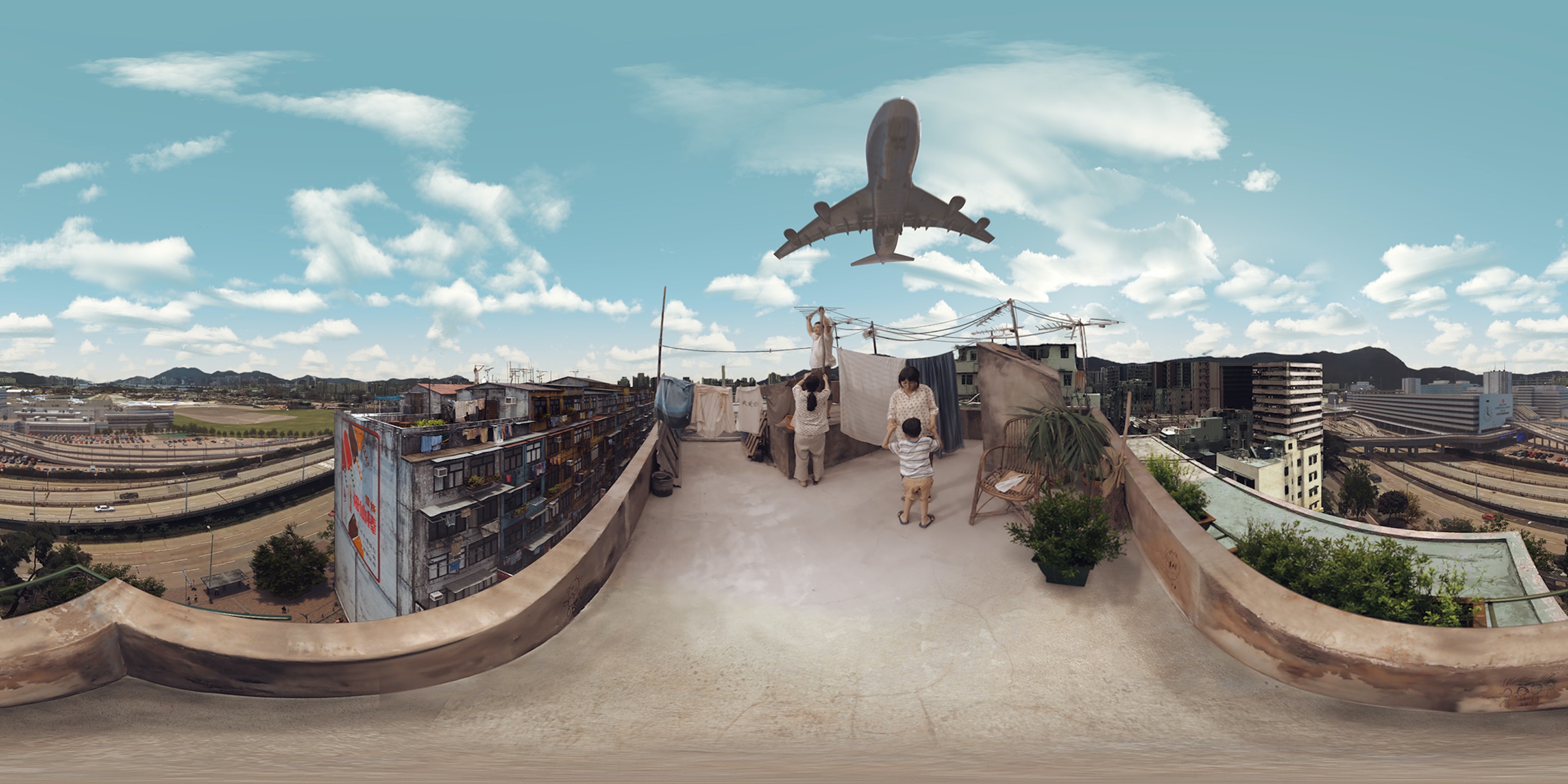 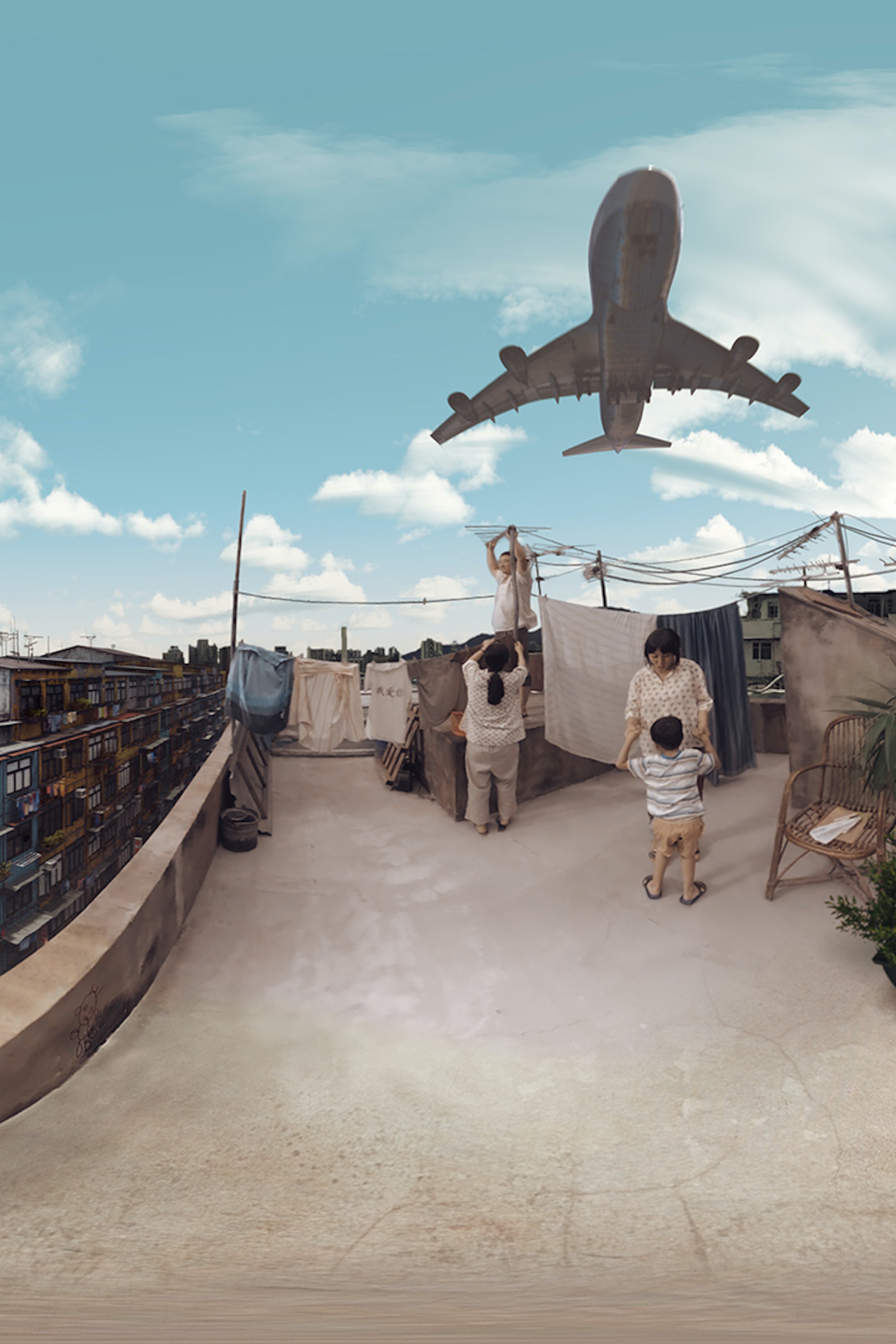 Towering over Hong Kong, 393 metres above sea level, stands Sky100; a 360° indoor observation deck inside the International Commerce Center. From here spectators have some of the most stunning views of a bustling Hong Kong. The Sky100 Timelooper offers a virtual platform to observe the city from 100 storeys high, and a glimpse into the culture and history that have helped form the city below.

Timelooper takes us to modern-day Hollywood Road. We see the Man Mo Temple as cars and tourists pour by; just a typical day on Hong Kong Island.  Suddenly we are transported back in time the year is now 1969 and Hong Kong is thriving economically and the population is steadily rising. Cinema and television are emerging as a popular form of entertainment. This is also the time of Hong Kong’s most famous son, Bruce Lee. In a befitting homage to Lee, a fight breaks out in the market! Our hero is forced to defend a woman’s honour from a villain who is relentlessly harassing her. The action is a classic sequence from this time, filling the audience with nostalgia as the two engage in a choreographed sequence. Despite the fictional nature of the fight, which was all filmed on green screen, the location has been recreated by MyLiaison to an astonishing degree of factual accuracy. There is Nam Kok Hotel, the traditional local market and most noticeably there are no skyscrapers, or Sky100, towering in the distance.

Once again, back at Sky100, the viewer can take in the magnificent views of Hong Kong. In the distance is Kai Tak airport, Hong Kong’s former international hub, which closed in 1998. Mountains and skyscrapers once surrounded Kai Tak’s runway as it jutted out into Victoria Airport, making for very dramatic takeoffs and landings. To experience this, Timelooper positions us on an empty rooftop in the present day before transporting us back to 1989 where we find a family living their typical day-to-day lives. MyLiaison has crafted planes that fly overhead, the noise and scale are spectacular in comparison to the family who hangs their washing and adjusts antennae. Again, the location has been recreated with amazing accurateness. It is incredible to think that both sequences have been filmed in a studio in Istanbul, with the visual effects being so seamless that not only are you transported to a totally different place and culture, but also time!

Both the stories displayed on Hollywood Road and Kai Tak airport demonstrate the growth and progression of Hong Kong throughout the 20th and 21st Century. Firstly, Bruce Lee skyrocketed to fame by breaking down the western stereotype often portrayed in the cinema of an emasculated Asian Man. Just as Hong Kong emerged as one of the four Asian Tigers in the 1960s, Lee helped to change the depiction of Hong Kong and establish it as a strong and powerful country. Similarly, Kai Tak illustrated the commerce giant that Hong Kong has become. By 1996 nearly 30million passengers and 1.56million tonnes of freight passed through Kai Tak annually, making it the third busiest international passenger traffic airport and the busiest for international cargo in the world. Its closure was forced by the expansion of the Hong Kong population and the consequent residential areas. The recreated historical situations also show this advancement, with modest surroundings and either no or few skyscrapers.

Finally, we find ourselves back on Sky100. The 100 storeys lifting us high above Hong Kong, the millions of people and the buildings below, all with their own stories that have helped to shape this bustling metropolis into the wonderful city tourists love to visit today.